Cynefin: The Tool That Doesn't "Do" Anything 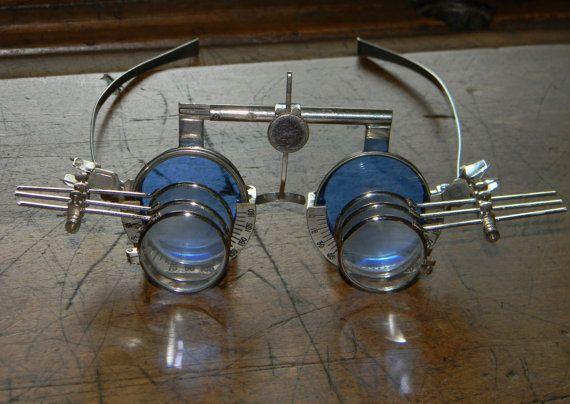 Ever since I was a little boy, I've been enamored with tools. I was raised alongside brothers by a mechanically-minded dad. Science, math & engineering classes always attracted me. As a current police officer, I resist my gravitation towards overly-simplistic technical solutions. My home garage has more hand tools than most in my generation. On this website, I write frequently about adaptive tools & smaller toolboxes.

Even though a mechanical, linear analogy doesn't quite fit, I've become more and more interested in mental and emotional "tools." This is especially true of my perspective on mental and thinking models, on which I previously wrote:

Cynefin is one (1) such mental tool. It's a sense-making framework, briefly explained in this older video by its developer Dave Snowden:

But classifying it as a tool can be inappropriate or misleading. I previously tweeted in January 2020:

Cynefin is a pair of glasses - that helps you see different properties, characteristics, and behaviors of situations, systems, and tools. It's a tool that doesn't "do" anything per se. Rather, it's about seeing, awareness, sense-making, and orienting.

Months later, I stick by this perspective.

As an example of this, I penned this post on LinkedIn in regards to Cynefin and COVID19:

"In mid-March, the COVID outbreak was Chaotic (AKA: WTF?). A seemingly unnecessary run on toilet paper & bottled water. Schools closed. Orders to work-from-home. Reserve hospitals erected. Financial investments tanked. Governor's stay-at-home orders. (Personally: My RN wife got exposed [never got it] & quarantined -- sending the kids & me to couch-surf with local family.) Probably as close to zombie land as I've seen it. But over time, familiar patterns emerged. We saw relationships & began figuring things out. We drifted into Complex. Anticipated tradeoffs between disease & economy. Predictions of the impact of lockdown on small businesses. Developed models built on assumptions. Political gaps returned. Unreconcilable conflict between groups of scientists & doctors. But still a lot of unknowns & unknowables!Through it all, we've had 'experts' behaving in wholly Complicated ways, ignoring other links. But this is appropriate...at some level. There will always be Clear & Complicated veins, clusters, & sub-systems within 'complex adaptive systems.'"

I feel it fits well into this perspective that Cynefin doesn't DO anything. Yet it allows us to see deeply and broadly into systems. (And when I say that, I mean "systems" around which we put arbitrary boundaries.)

Cynefin doesn't tell us what to do, in the same way a measuring tape or sliding T-bevel doesn't tell us how to build a home. But the advantage to Cynefin lays in its broad prescriptions on how we should behave, engage, or operate in the domains: 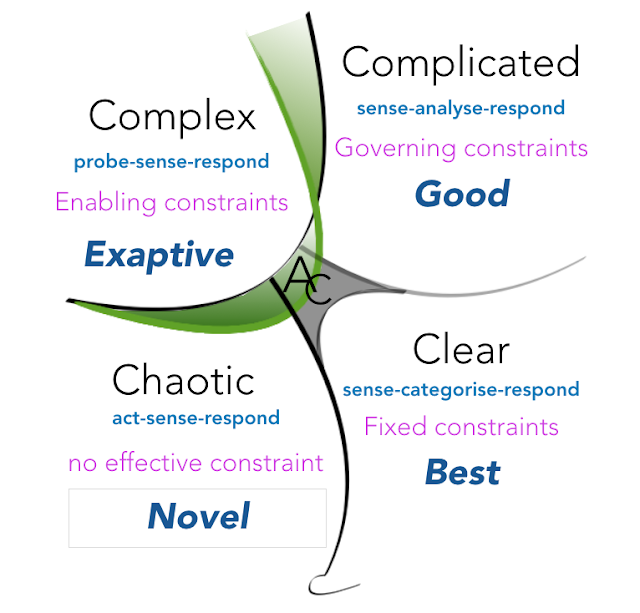 As an example, "Act-Sense-Respond" is far from a checklist or recipe of responses in Chaos. It is, however, a broad strategic overview of how to appropriately engage. But first, it requires that we recognize that we are in an environment of Chaos. (This recognition is vital phase in greasing our OODA Loops into tighter, faster turns...but I don't have time to get into that in this post!)

What Cynefin has done for me is to give me the requisite "eyewear" through which I can look at the world around me, from high-altitude perspectives down to intimate, microscopic detail. No matter where I draw the lines around a system or cluster, through my Cynefin glasses, I can more vibrantly see the characteristics and relationships within. And I believe that gives me an edge. (I'm teaching my kids how to use their Cynefin glasses too!)

There are still dimensions of Cynefin with which I disagree, do not fully understand, and, as such, do not appreciate. As imperfect as it is, I predict Cynefin to be a permanent tool within my repertoire.

Even though it really doesn't DO anything.

Lou Hayes, Jr. is a criminal investigations & intelligence unit supervisor in a suburban Chicago police department. With a passion for training, he studies human performance & decision-making, creativity, emotional intelligence, and adaptability. Follow Lou on Twitter at @LouHayesJr or on LinkedIn. He also maintains a LinkedIn page for The Illinois Model.
chaos cynefin decision making