Your Brain's Battle Between The Professor & The Caveman 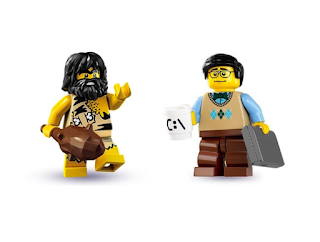 Inside the human brain are two operating systems. One portrayed by The Caveman; the other by The Professor. Together, these two little guys make sure you live to think another day. How these guys work together or battle against each other is a matter of deep scientific research. I'd like to tell you a story instead:

The Caveman is responsible for human survival. He relies upon intuition and gut feeling.  When The Caveman feels threatened, he resorts to natural instincts of fight-or-flight. He is not stupid, and he slowly gets smarter as he gets older, much like a growing child. The Caveman learns from his experiences. He's also a master of sensing danger. But he's a "bull in a china shop" - physical strength is his strength.

He recognizes red flags and patterns in his environment...maybe the signal a sabertooth tiger gives off when it disturbs the tall grass. The Caveman makes lightning quick decisions based on a life of learning the hard way...creating some  much needed (and implicit) biases while fending off a pending threat.  Fear not; he's a tough son of a bitch.

The Professor is a higher order thinker. He uses his logic, rationale, and education to analyze problems and synthesize solutions. He's slow, but he's critical. The Professor prioritizes...and forecasts...and weighs options. He is obviously smart too...but in a more intellectual, book sort of way. His perfect penmanship is a demonstration of his delicate fine motor skills.

However, The Professor is a sissy. He does not handle stress well. When he feels threatened, he shuts down...or more fittingly....he passes out cold. He leaves the dirty, time sensitive work to his partner, The Caveman. The Professor prefers the quietude of a library...and buckles under time constraints. Perhaps most interestingly, The Professor informally tudors The Caveman...giving him experiences to rely upon when called up for survival work.

The Caveman and The Professor, though at odds frequently, work together as partners in the human brain. We all have these two guys in our heads. And with some understanding, we can get more out of them.

The Professor relies upon slow, critical thinking. He feeds on analyzing his surroundings, the situation, problems, and options. He needs time and understanding of the minutia. He calculates and ponders.

The Caveman knows fear. He recognizes when the danger is approaching. He knows when The Professor is about to faint. If only The Caveman could relay his observations to the human..the human might be able to breathe, slow down, and keep The Professor engaged. After all, The Professor has historically demonstrated better decision-making. We want him at "the controls."

As the human, we need to give The Professor practice at solving complex and complicated problems under low stress. He will succeed. Even if he fails, he learns. Then he will tudor The Caveman on a summary of the lessons. The Caveman does not understand it all...but he gets some of it. And that's pretty good.

Most any adult can recall a time when The Professor fainted and was controlled by The Caveman. Maybe it was a horrific car crash. Or being the victim of a crime. Maybe witnessing a loved one experience a heart attack. Maybe it was during a bar fight. Or even during a heated argument. The Caveman took over (just like he wants to) -- and you felt the instinct to run away or punch someone in the nose. Maybe you even did those things!

The Professor, had he stayed in the game, would probably not have responded as quickly or rashly as you did. He might have stayed cool and collected...making methodical decisions and actions. Maybe used persuasion or a new creative solution. His fingers wouldn't have trembled while calling 911. He would have seen all the nuances of his environment. He would have...well....thought a little more.

As humans, we have to embrace these two characters. Without an understanding of how The Caveman and The Professor battle in our brains, we may become paralyzed at hints of danger or stress or timelines. We need to limit the time we are influenced by The Caveman.

As a police instructor, I have to design training programs and policies that account for both The Professor and The Caveman. I have to predict that many, many times in a police officer's career, s/he will experience The Caveman firsthand. With the proper programming, I am convinced that our officers' Professors can better teach their Cavemen. And better recognize when The Professor is feeling a little dizzy. This in turn leads to more accurate decisions, more ethical behavior, and better performance.

I hope this story is one that can help all of us navigate the dangers and stresses that life throws at us. Hopefully not ones that want to eat us for dinner.

Lou Hayes, Jr. is a police training supervisor. He studies human learning and decision-making as they relate to adaptability. Follow him on Twitter at @LouHayesJr.