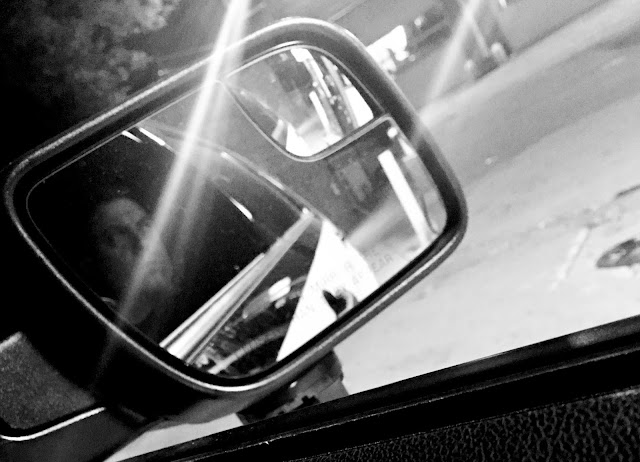 I vividly recall the feeling when I popped out of the subway into Times Square. I had lost my bearings. No sense of direction. So many flashing lights, honking horns, fast-walking pedestrians. Hard to separate signal from noise. Our hotel was but a block away (as learned from studying a map), but I didn't know which way to begin. Aside from our luggage as a red flag, I must have had TOURIST written all over my face.

Contrast this New York City scene with dropping me off on a corner of hometown Chicago and taking off my blindfold. A check of a street sign and some address numbers on a building might tell me exactly where I am. Other clues include: the people, architecture, landmarks, smells, the direction a river flows, the route name on a passing CTA bus, clues in a billboard, gang graffiti.

The bits of stimuli begin to cluster together to help a person make sense of the situation. But they can only synthesize a hypothesis or answer based on historical knowledge. It requires an understanding of street layout, public transportation systems, housing styles in certain neighborhoods, and where Sears Tower is. It's current circumstances being oriented to or compared with previously-etched mental models. Without the foundational heuristics, schema, patterns, or connections...observations are near worthless and likely overwhelming.

In tactical police training, we moderate hood drills. Instructors engineer a scenario or challenge. Student officers, armed with full equipment and paintball-type weapons, put on black-out goggles or a hood over their heads to completely obscure their vision. Sometimes instructors give a quick briefing to give some context to the situation; sometimes not. Instructors then escort a student into the unfamiliar scenario location &....the hood comes off! The student must interact with the completely new, surprising environment and the roleplaying actors within it.

What types of challenges, simulations, or scenarios?
The bulk of these drills last between ten (10) seconds and two (2) minutes each. We often allow those who have already experienced the particular drill to sit back and watch their peers experience the same drill. For some, knowing their peers are watching them adds to the anxiety levels. Fear of failure is strong.

Simulations are tests more than they are training. However, they do serve a purpose in developing new learning, new mental models, and new connections between dots. We supervisors use hood drills  to evaluate our people and teams. For me, the most valuable portion of these drills lay in the debrief and feedback sessions that follow the simulation. This is where the learning occurs. And oftentimes, it's less about what they did, but what they were thinking.

But what makes an effective debrief or feedback session?

Much of this depends on whether decisions were being made consciously or via auto-pilot. We begin with questions on what the student saw or observed. Answers at this stage should be as objective as possible. The student may see a pool of red liquid under a person laying on the ground. That the person is bleeding from an injury is an assumption at this point.

Don't get me wrong - this might be a very accurate assumption(!), but this extends beyond a mere observation. Assumptions, conclusions, hypotheses, and theories are absolutely vital in decision-making in complex or chaotic situations. But they are not possible without first making observations. Did the student miss obvious signs and signals (lack of awareness)? Did a student see things that did not actually exist (Incestuous Amplification)?

A tricky, but powerful question is: What were the significant (and insignificant) observations? This is valuable because it begins to link objective observations with their level of importance -- based on hastily-assembled theories. Another question, what else would you like to know about the situation? turns us from passive observations to actively seeking information that will help us make sense of things. Because after all, some of our decisions in complexity is to probe and to learn more information before a full commitment to a bigger or more terminal decision.

Another stage (though not necessarily a linear next stage) probes the assumptions. What did the student know, believe, think, feel, and assume of the situation? Basically, we want to know how did the student take those observations and generate sense out of them. While we may never truly know the biases or life influences that went into a person's assessment of a situation, our questioning strategy can get inside some of the process. The clarity and articulation of these answers give us hints as to whether the student's decisions were being made by The Caveman or The Professor.

To some, hood drills are stressful. My experience is that humans tend to be fearful of the unknown and unknowable. I've held many officers' arms while escorting them to the simulations..sweating, trembling, and breathing heavily. But conversely, I've escorted others who are cool as a clam. I asked one veteran, "You don't seem nervous?" hoping to nudge him into even mild trepidation. His answer: "We've done a lot of these. I know I'm not going to get hurt. What's there to be afraid of?" This is a guy who lives for those challenges. He is a learner. He is curious. He is comfortable in making errors in from of his/our peers. It's no wonder guys look up to him. I want more people like him. He's a maker-of-sense.

We as police tactical instructors would be foolish to evaluate student decision-making and physical performance without first establishing how s/he made sense of the situation. We as the designers of the scenarios can be easily fooled and biased into thinking every student that experiences the same drill will make sense of it as clearly and objectively as we did while designing it. We can be cursed by our knowledge - as opposed to being dropped into the situation blindly with a whole set of different expectations and anticipations.

Why didn't they see that?...We put it right in front of their face?...What would have made them think that?....That's not what we thought they would think...

Observations, comparisons, and assumptions are a vital part of sense-making. It can also be extremely personal and individualized - and even in conflict with the rest of a team. Sense-making, whether as an organization or an individual, lays the groundwork for problem-solving. It's getting an awareness and significance of our surroundings and situations. Only then can we can begin to consider options and alternatives, based on what we want in the future.

Unlike our hood drills, sense-making is never complete. We live in a perpetual state of figuring things out.

And thanks to the baby-faced NYPD patrolling Times Square for a quick point in the right direction. Stepping out of Grand Central Station very much rekindled feelings of having my hood pulled off.