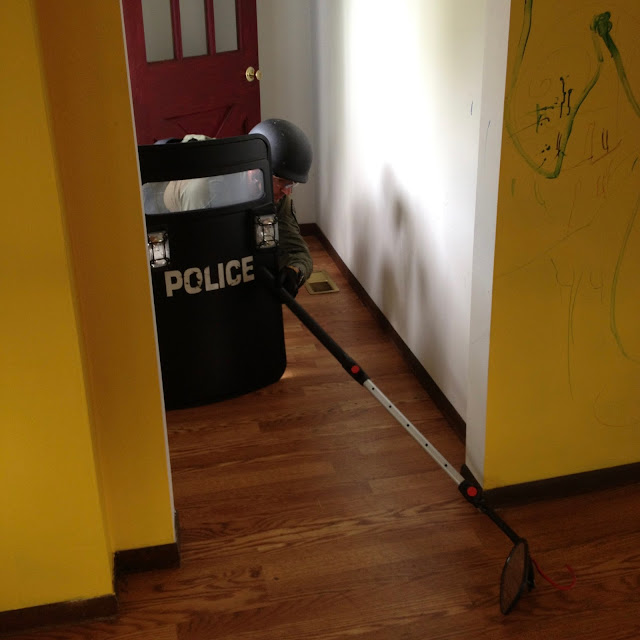 When I first saw Dave Snowden's Cynefin framework, I was still detailed to the police department's SWAT unit. Of the various terms in his diagram, PROBE was certainly one that stood out more vividly than others: 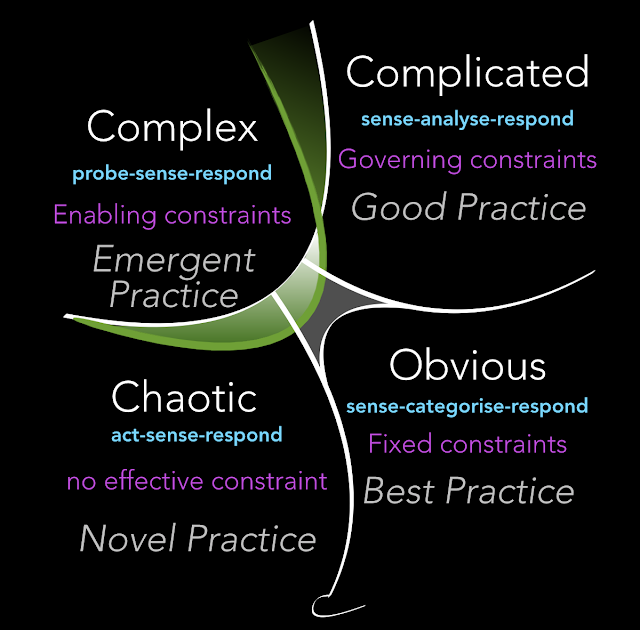 I immediately made a connection between probe and some specific strategies used in police tactical incidents. For my fellow SWAT knuckle-dragging operators out here, the practices of breach-and-hold, limited penetration, and of course stealth probing all came to mind. Let's use an example:


Imagine a gunman holed up alone his home. Negotiators have been out of contact with him for several hours. There is little intelligence on where he may be inside...and just as little on the layout or floor plan of the home. What to do next?

But what does probe look like in that context? It can take several forms (in as lay terms as possible):
What would be deemed as reckless conduct was if the police officers barged inside in loud, fast "raid"-style tactics. That would not be probing; that would be committing. Like jumping off a cliff without knowing what's beneath. Rushing in might cause a confusing confrontation, under challenging time constraints. That's a recipe for disaster.

We don't need commitment yet. We need to exploit time, learn more, make sense of the situation, and continually refine plans. Probing allows for that.

Here's a screenshot from thefreedictionary.com: 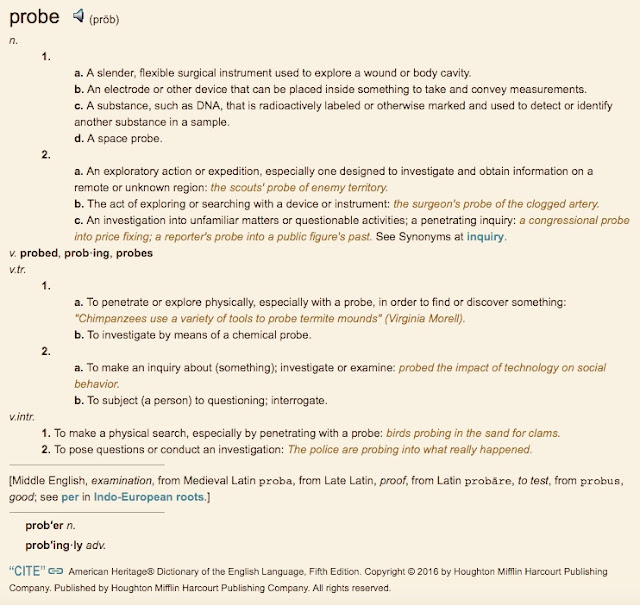 I spent plenty of SWAT barricaded person callouts as the Point Man - the first guy up front dictating the speed and direction of the team. It wasn't always with a shield and mirror (as depicted in the photo above), but I took whatever equipment and used whatever tactics possible to give me the team the best advantage to make the best decisions possible.

During our probes, we found people passed out drunk, dead from self-inflicted gunshots, laying in ambush for us, and occasionally not inside at all! We made good decisions because we knew how to hunt for information and perpetually adapt. Through our speed, direction, and distance, we influenced how much data, stimuli, and change came at us -- and maximized our chances of processing that information on-the-fly into actionable intelligence.

Our operational decisions were based on a foundation of shared team values, but also on recent, accurate information paired with the truest-possible assessment or orientation of what is likely or not likely to be happening. Time and distance were our friends. They allowed us to make sense of foreign situations without compromising too much. All of our actions were purposeful.

I've thought a lot about my current assignments in the police department and how to use probing. As a Detective, my interview & interrogation strategies had their versions of probing and sense-making. Now as a supervisor and trainer, there are unique manifestations too.

Your situation or career does not likely use night vision, robot cameras, thermal optics, or homemade mirrors-on-painters-poles to navigate strange territory, seeking dangerous people. But it likely does have ways for you to slow down, gather information, more clearly figure things out, and adjust plans before fully committing to a course of reckless action.

I recommend spending more effort figuring out how probing applies in our jobs, hobbies, roles, and journeys. Let's leave the surprises to Christmas morning and horror films.

Lou Hayes, Jr. is a criminal investigations & intelligence unit supervisor in a suburban Chicago police department. With a passion for training, he studies human performance & decision-making, creativity, emotional intelligence, and adaptability. Follow Lou on Twitter at @LouHayesJr or on LinkedIn. He also maintains a LinkedIn page for The Illinois Model.
clusters complexity cynefin tactical