Adaptive Problem-Solving, From the Hospital Emergency Room to the SWAT Team 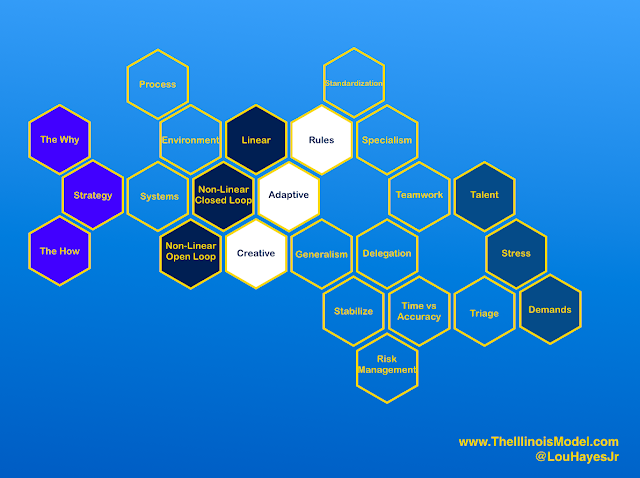 In December 2013, I wrote and published a blog post titled The Doctor in SWAT School (and What His Performance Says About Police Culture). Thanks to the overwhelming sharing of the post, it is one of my most visited pages on The Illinois Model website. It's a real life story with an accompanying theory in perpetual refinement.

The story begins with an emergency room physician named Jeremy (his real name). We met through my wife, an ER/trauma nurse who worked with him in Chicago. Jeremy took an interest in my job as a SWAT police officer, as he had aspirations of volunteering as medical support for a local SWAT team.

I helped Jeremy find a team willing to take on a doctor in a support role - usually in the safety of an armored truck or down the block at the command post. But Jeremy is an overachiever. Instead of enrolling in an abbreviated training class for unarmed (and limited-role) tactical medics, he weaseled his way into proverbial boot camp for veteran police officers transferring to SWAT teams. Jeremy challenged himself, knowing the skills he'd learn would be above and beyond those he'd be tasked with in real life police emergencies.

Jeremy not only survived the school; he excelled. His trainers told me he was the best performing student in the class! This shocked me - because he was a doctor among seasoned police officers.

To me, there was only one theory how this could happen. There must be something similar in the traits of a successful emergency room physician...to those desired in our police SWAT team members.  The ambiguous answer lay in his decision-making abilities. But I needed something more concrete than that. What mental or emotional attributes made Jeremy excel outside his normal environment?

In that original The Doctor in SWAT School blog post, I detailed a list of connected theories:
What are some other attributes that helped the doctor tackle wicked tactical police problems?
Jeremy spent several years as a physician for a Chicago area SWAT team's tactical medical unit. He figured out how to transfer these soft skills from his experiences as an ER doctor into a fresh landscape of law enforcement emergency response. And from my conversations with him over the years, this is not something that Jeremy turns ON or OFF just while he's in the emergency room attending to sick or injured patients. This is simply how he lives and makes decisions for everything in his life. It's who he is.

So maybe the next questions should be whether or not these traits can be taught, learned, or grown in humans? Is it a product of experience? Workplace culture? Growth mindset? Problem-solving games? Case studies? Paranoia? Focus?

I've yet to hear anyone argue against adaptive problem-solving. Most appreciate the theories of adaptability, agility, or flexibility as necessary attributes to success in chaotic or stressful situations.

Are we doing enough to articulate or codify what adaptability is all about?

If not, how do we expect to replicate it?