December 06, 2013
This is the lesson of a trauma/emergency room physician and his two weeks in police SWAT training. His performance in school caused me to re-examine the training and education I had been giving to police officers...and how culture might be more important than everything else.

My friend is a full-time emergency room doctor in a well-respected trauma center.  He was entering into two weeks of police training, more specifically Basic Special Weapons and Tactics (SWAT) School. The doctor decided to pursue a volunteer position on a local SWAT team's Tactical Emergency Medical Support (TEMS) unit. But this was not an abbreviated familiarization course tailored for doctors, nurses, or paramedics to become "tactical medics." This two-week school was to prepare veteran police officers for an assignment as full-blown SWAT team officers. This course is no joke.

Given that he had NO prior law enforcement experience, that his only firearms training was of the self-taught variety, and that the rest of the 20+ students were experienced street cops and detectives,  I didn't have very high expectations of him. Upon the conclusion of the school, I talked to the course instructors. They remembered him vividly.

Uh oh...was he THAT terrible?

Quite the opposite. He excelled, labeled by the training staff as the top performer in the whole school. The most solid tactical thinker among experienced crime fighters. This sparked a conversation...and I had an epiphany about police culture and officer training. 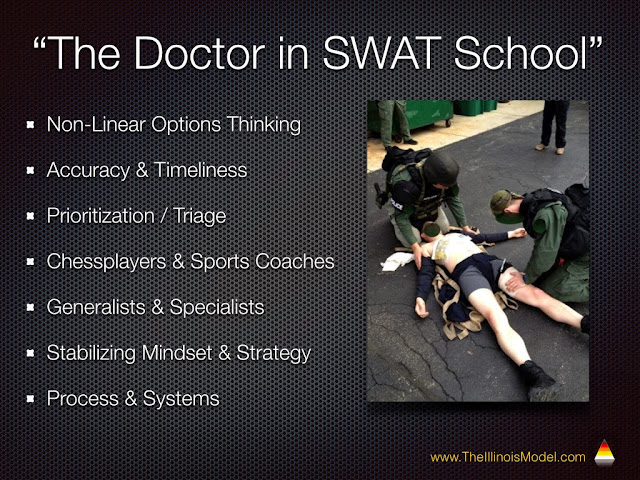 Since then, I've spent a lot of time scribbling, brainstorming, and diagramming the cultures of ER doctors and SWAT cops. I've conceded that treating patients in a bustling ambulance intake bay requires many of the same "soft" skills as a complicated hostage rescue mission. I initially overlooked these culturally-driven traits when presuming the doctor would sink in SWAT school. 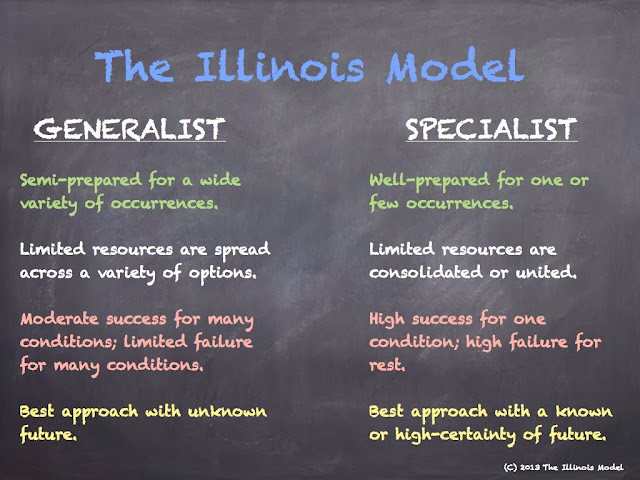 When I look at the above list of so-called "soft" skills, I question What's so soft about them? These are identifiable aspects of a problem-solving culture...whether in a hospital emergency department or a police officer responding to an unknown disturbance. These are describable and articulable skills, attitudes, and abilities. But because of their lack of technical-complexity or application, society calls them "soft."

Whatever we call them, we have to find ways to nurture and cultivate them in our police officers. We have to change the culture of our people from technicians to problem-solvers. The same goes for soldiers, and firefighters, and emergency managers, and nuclear power plant operators, and pilots. But then why stop there? Why aren't these traits being specifically named, taught, and evaluated in grade school? or college? or in trade schools?

I don't know enough about medical education to know whether or not these traits are being addressed or not. I'd venture they are not. But I intimately know police training, from basic police academy curriculum to advanced legal, strategic, and tactical courses. These concepts are barely mentioned. They exist, but we don't educate, train, or evaluate based on them. However, there is a pocket movement that lumps these ideas into the term "adaptive leadership" and tweaks it for law enforcement. These are steps in the right direction. I'm excited to hold even my small stake in the advancement.

The phenomenon of my emergency doctor friend succeeding in SWAT school is not an anecdotal anomaly. It's not a coincidence. It's not a fluke. I've looked at this story from every angle possible, including the consideration of the narrowness of SWAT-type missions and objectives. The disparity in technical skills and equipment for the professions of emergency doctor and SWAT operator is not wide enough or important enough to overcome the similarities in the soft skills of mental problem-solving programming.

We in the police training industry must embrace these skills as some of the most telling, most related, and most critical to effectively function in chaos. We need to not only change our language, but our emphasis.

Because going into that two week school, my friend's piecemeal of equipment and sloppy technique was surely no foreshadowing of his underlying preparedness.