Anticipation: What's Behind the Door? 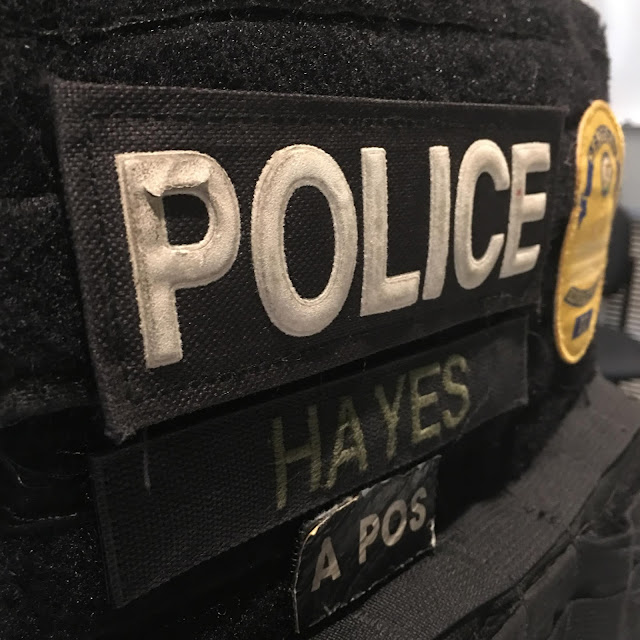 Back in late 1990s and early 2000s, and to a lesser extent today, the Pointman was the SWAT officer who went into danger areas first. On my team, the position required a certain skillfulness with the ballistic shield and pole-mounted mirrors. Those of us desiring such a position often wore two (2) pistols...one (1) on each hip. Like Yosemite Sam. (It was easier to brandish a handgun, ambidextrously, while carrying the shield.)

As a youngster to the police SWAT team, I dreamt of be assigned as "The Point." Within a few years, I was given the opportunity.

The Pointman was an awesome position. First off, it guaranteed that I was on the "entry team" that went into a building (as opposed to being stuck outside on the perimeter). I held the responsibility to maintain or adjust the speed. I got to pick whether the team moved left or right. Most importantly, it mean you were trusted by your teammates. And to me, that mattered. A lot.

The bittersweetness to the Pointman position was that was a breeding ground for SWAT supervisors. And that would mean certain removal from such a great responsibility up front and in the middle of the action.

Spring 2007. My team was called to an apartment building to apprehend a murder suspect.

Nobody knew for sure if he was still inside, or if he had slipped out during the commotion of the initial police response.

Hours had passed with our team in the cramped hallway. Negotiators had been calling his phone. They'd used a bullhorn-type speaker. Yet for hours....no response.

During the standoff, we got permission from another building tenant to walk through his apartment - an identical floorpan to that of the murder suspect. It allowed us to get a sneak-peak of what we might be walking into later in the evening.

I was not alone in thinking that the suspect was not home.

I've come to appreciate a difference between Anticipation and Prediction. One (1) such influence was the paper Anticipatory Thinking by Gary Klein, Dave Snowden, and Chew Lock Pin, where this quote stands out:

Another difference [between anticipation and prediction] is that anticipatory thinking is aimed at potential events including low-probability high threat events, not simply the most predictable events.

When we anticipate, we take into account a variety of future states, not just those with the highest chances of materializing.

Anticipating puts us into a frame of mind where we see what is possible. and begin to ready our minds for making decisions in those imagined circumstances. Prediction limits us to anticipating only the highest probability events.

It was time for our team to approach the door. As the Pointman, I held the shield in one (1) hand and the landlord's key in the other. Teammates covered me with a variety of deadly and less-lethal weapons, in case the suspect confronted us.

My mind was not where it should have been. I had, hours before, convinced myself that he was not inside.

I crouched behind the shield, stuck the key in the lock, and turned the knob as quietly as possible. As I gently applied pressure to crack the door open....it was slammed shut! From the inside.

The other thing that slammed shut was my asshole.

When you anticipate, you prime your decision-making process by pre-observing and pre-orienting, a la OODA.

Anticipatory thinking puts an imagined circumstance into your bank of experiences. Your mind can then start to analyze that situation, synthesize options, hypothesize how those options may have second- or third-other effects, and then cycle through all those potential options until a good enough (or optimal) decision is "primed" for later. [Later = if that circumstance happens.]

I refer to this pre-orienting as a way of "greasing OODA" - applying a cognitive lubricant to the decision-making process. People who anticipate more inevitably generate more options...which yield better options. And they can more quickly act on these decisions in a reflexive way. It's the recognition-primed decision-making...but based on imagined scenarios as opposed to historical experiences.

I reverted to what years of experience told me: Create distance and give the negotiators the time and protection to restart announcements over their PA system.

Within minutes, the suspect surrendered out that same door, into the hallway.

And after he was in handcuffs, I hung my head. I let prediction take over when my team needed me to be anticipating.

Nobody got hurt. There was no shootout. The man was arrested with the only "use of force" being the pointing of a Taser and a few guns his way.

But a good outcome is no way to justify a terrible process.

As a matter of good process, anticipation and prediction have to work together.

There is no magical recipe for how much weight to put onto certain possibilities or probabilities.

You've gotta factor in consequences, and probabilities, and discretionary time into an abstract risk management matrix of sorts. And anticipation opens the mind to a wide array of possibilities.

What did I learn from this particular standoff?

I learned a critical difference between anticipation and prediction. Well before I read any academic paper on it, had the terminology to explain the experience, or could articulate the mindsets.

Lou Hayes, Jr. is a criminal investigations & intelligence unit supervisor in a suburban Chicago police department. With a passion for training, he studies human performance & decision-making, creativity, emotional intelligence, and adaptability. Follow Lou on LinkedIn, & also the LinkedIn page for The Illinois Model.
decision making OODA tactical use of force