The Biggest Hurdle for Tech in Policing (& Probably Your Business Too!)

The modern police officer, squad car, and detective bureau is full of technology that did not exist a decade ago.

I just read an article on Fast Company: Motorola is building a new kind of walkie-talkie for first responders.  It unveils a new portable radio for police officers that uses a touch screen with capabilities that are not inside any current model.

It looks pretty cool. But then I started to think about how it might actually be used on the street.

Or maybe I should say, how it would NOT be used on the street.

The article got me thinking about the changes in tech I've experienced in my 22 years (and counting!) of policing. Some advancements have been game changers; others have been duds. They all share a significant obstacle:

Human factors is a field that addresses the interaction between a human and the environment. It addresses things like ergonomics, performance-under-stress, rationalization, perception, physiological adaptations, attention, taking shortcuts, and habituation. Human factors are considered "soft," often referred to as the non-technical skills that make up humankind across domains, contexts, and situations.

Every piece of technology must overcome the ingrained practices and conditioned responses of those who are charged with using them. Add in some stress, such as that experienced by a police officer or firefighter responding to an emergency, and you've got deeply etched patterns of behavior and primal intuition to overcome.

Because of these human factors and their impact (or lack of) on changed behavior, I am skeptical of the magic bullet promises that accompany so much tech. I often ask the users themselves, "How are you actually using this operationally?" All too often the responses are what you might expect. The capabilities exist, but aren't being exploited.

And I mean exploited in the best way possible. As an ethical advantage to previous practices. To gain a strategic or tactical edge.

We have the capabilities right there. But we revert back to how we used to do it. In some cases, how we did it in the 1990s or before.

For years, I've found the tension between capabilities and demands to be fascinating. So much so that I was sure to include it within updated versions of The Illinois Model, specifically here in the red axis: 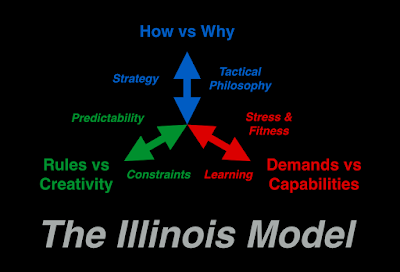 When I talk about this Demands vs Capabilities dimension, I include things such as: human factors, habituation, stress responses, conditioning, skill retention, growth & learning, stress/fitness/boredom, auto-pilot, the OODA Loop's "Implicit Guidance & Control," and so much more.

I find the addition or substitution of tech in the workplace to be best captured in this red axis of The Illinois Model. When examined through this lens of human factors, the failure to exploit technology becomes much more rational, logical, and understood.

These are human factor issues.

So how do we best implement technology and new practices in places where habituation runs deep and stress reduces cognitive abilities?

We should begin with an understanding of subconscious conditioning through exposure, training, practice, and repetition. Our inner cavemen are always working!

We should understand the learning science (which is ironically at play with this subconscious conditioning!) and exploit it when developing new skills with prospective users.

We should exploit opportunities to debrief real-life situations and explain how new/existing tech or practices either contributed to success/failure, or how if used (as opposed to the used old tech/practices) new tech could have contributed to success. "Hey guys, using the GPS maps would have really helped with _____."

We should think in terms of small incremental steps. I consider my new-ish portable radio...and how little of its capabilities my team uses on a regular basis. What if I encouraged integrating a few additional practices or techniques with that radio over time to exploit those capabilities?

Tech is cool. But we need to better appreciate why and how old dogs might not necessarily exploit new tricks.
***