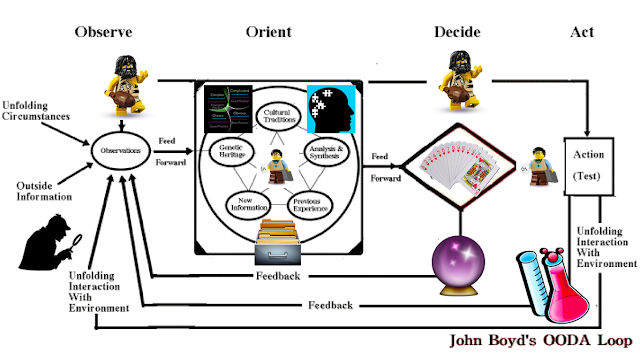 If OODA is depicted (incorrectly) as a circle, it ignores so many of the pathways that keep it so universal.

When I whiteboard OODA, I draw in lots of extra pieces. One (1) of them is a crystal ball along the arrow from Decide-to-Observe. I consider it the crystal ball feedback pathway.

It's where options are pondered before commitment. It's how the actor is mentally rehearsing, simulating, modeling, forecasting, anticipating, using imagery, and even predicting.

This crystal ball pathway is where Gary Klein's Recognition Primed Decision-Making (RPD/RPDM) sits. The actor pushes scenarios through hypotheses to find a suitable match - often the first match that is reasonably fit for the current situation. It's a lightning fast cycling through OOD-OOD-OOD...until a good enough option can be released forward into a committed decision. (Commitment of course being a relative term.) 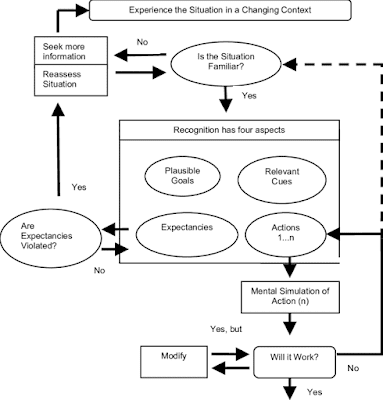 [above RPDM image attributed to Klein, 1983]

Another aspect here is that of paralysis-by-analysis. It's the seemingly frozen decision cycle often referred to as over-thinking. I theorize two (2) different ways it materializes:


I find great value in using OODA as a framework on which to hang other frameworks, models, processes, and theories. It's a framework to which I can relate almost any of the cognitive research that's out there.

But you've first gotta stop drawing OODA like a circle. Only then can you start to see how the other stuff connects.

I've added an OODA resources & links post to my website. Hopefully, the resources within will give you a better understanding of John Boyd's study, language, and theory.

Lou Hayes, Jr. is a criminal investigations & intelligence unit supervisor in a suburban Chicago police department. With a passion for training, he studies human performance & decision-making, creativity, emotional intelligence, and adaptability. Follow Lou on Twitter at @LouHayesJr or on LinkedIn. He also maintains a LinkedIn page for The Illinois Model.
decision making OODA