The Spectrality of Non-Linearity 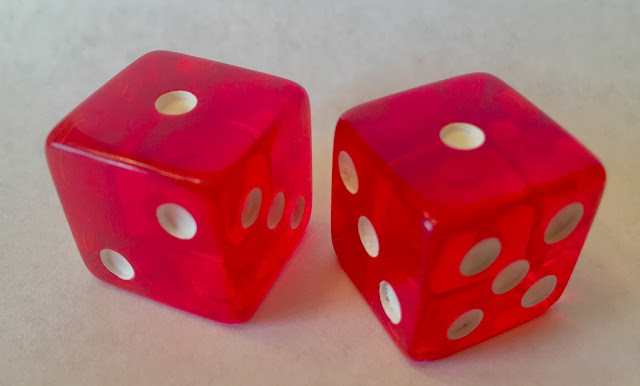 One way I help explain adaptability and complex systems is through imagery or heuristics of linear versus non-linear structures.

Let's stick with non-linear-closed-loop environments. I've been spending a lot of time visualizing these structures for not only the length of the factory assembly line, but also the variety or diversity in available options (width).

Take these three (3) games of chance:
All are non-linear-closed-loop endeavors. No new variables can possibly emerge in the system. (If you can't agree to that, stop reading now. You'll be wasting your time.)

The coin has two (2) options with equal probabilities - not very wide. The die has six (6) options - slightly wider. The deck of cards is considerably wider, yet still maintains equal probabilities among all the alternatives. (Open-Loop systems have an infinite width of emergent possibilities.)

Flip the coin once. Roll the die once. Draw one (1) card.

Finitely calculable odds of any single outcome. If you were to diagram the options, the number of branches on the very short decision tree would be different in each situation yet finite...which is sorta the point of closed-loop environments!

Flip the coin again. Roll the die again. Shuffle the card back into the deck and draw again.

Our decision tree grows branches. The coin tree has four (4) tips. The die tree has 36. The card tree has 2,704. Taller tree. Each growing in width. Still finite.

Let's do everything a third time.

Games like this have simple, known, static, repeated probabilities. The coin flip is binary - every single time. As such, its decision tree remains relatively thin and narrow. Each branch is equal in strength or confidence. On a spectrum, it may be described as being more linear than the others. The playing card tree is much wider and more complicated with each draw.

But what about when not every option has equal probabilities?

Let's exchange the "fair" die for a "loaded" die - where it's been tampered with to influence how it rolls. The probabilities are no longer equal; particular sides now have increased/decreased odds. But we can still create a decision-tree. It just no longer puts each branch at equal probability. Certain pathways become more likely...or surer bets. That'$ where the $mart money play$!

Most things in our real lives are not as structured, obvious, predictable, stable, or repeatable as coins, dice, or playing cards. But it's a starting point to discuss the spectrality of non-linear environments and functions. Our decision-trees become messy, twisted, tall, and wide. Sometimes we have a predictable pathway with really high odds...that almost acts as a linear system - where we can control many of the outlier variables and build a more consistent system! And sometimes those sure things break off without notice, like a tree limb in a windstorm.

Experience matters in some situations. Data and research plays a part too. Portions of our lives play with loaded dice where we can make estimates or anticipations of taking certain pathways up the tree. (or down the tree...however you imagine it!) Figuring out the slightest of trends puts us at an advantage. I've asked it before: If you had a 51/49 advantage, why bet on the 49? (If you answered "Because the payout is bigger...I'm with you!")

Every change in our environment (whether it emerged with or without our intervention) creates a new sprout or split in the tree branches. How it splits may be up to the control or constraints we have in the system. To claim nothing is predictable is foolish; to claim everything can be assigned a percentage is more foolish. Real life is not a game. But we can learn from games.

I hope these heuristics can spark deeper conversations about a spectrum of non-linearity - addressing: odds, length/height, speed, calculability, importance, iterations, width, open- versus closed-loopedness, or something else.