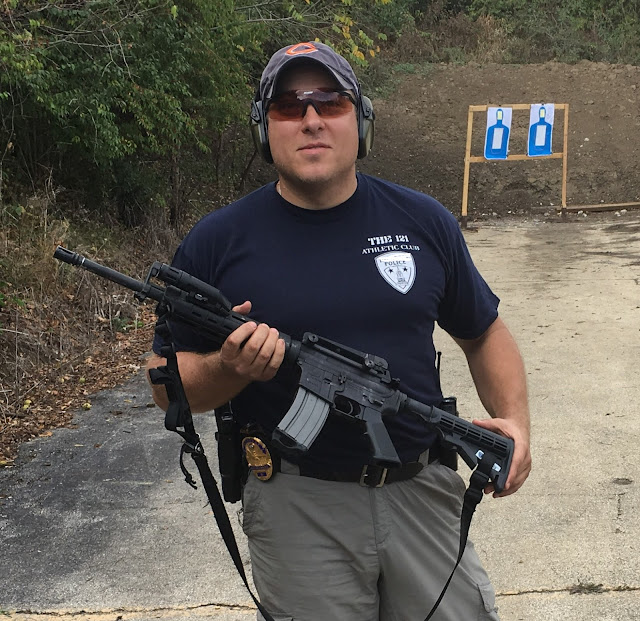 Almost twenty (20) years ago, I received my first firearms trainer certificate after a week of: shooting, reviewing shooting fundamentals, practicing range commands, and...giving a five (5) minute lecture to my classmates on a relevant topic of my choice. It was a terrible class.

I left class without learning much. As I was now going to be responsible for safely running a firearms range, I relied upon what I experienced as a police academy student several years prior.

So what does a typical 1990's police firearms range look like?

Well, it looks a lot like 1970's firearms range pictures: 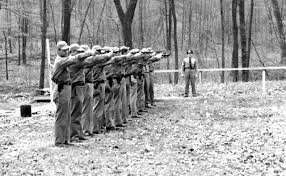 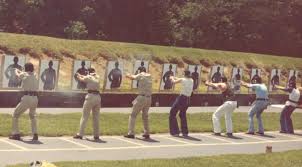 Are those dago tees with bell bottom jeans?!?

My point is...you add two (2) decades to those photos and not a lot has changed besides the fashion.

Classically-trained firearms instructors maintain tradition. They adhere to the classics. So what exactly are the classics? I'll identify five (5):

FIRING LINES. You want to run an efficient range? Put them on a line that runs parallel to a line of targets. You can get a lot of shooters on that line. Plus, the shooters probably won't shoot each other.

COLD RANGE. Anyone not on the established firing line has an unloaded weapon. We don't need any Oopses.

SYNCHRONOUS ACTION. Think: synchronized swimming. Everyone is doing the same thing...at the same time. It's predictable. It's safer that way.

CHOREOGRAPHED MOVEMENTS. Everything has been planned out ahead of time. Just do. No thinking required. No communication required either.

As a recovering classically-trained instructor, I now take issue with every one (1) of the concepts above. I may have repeated by training how I was trained....but I see things differently now.

FIRING LINES. Mass-production via factory assembly line has its place. The firing line allows for the very basics of drills to be done simultaneously in a safe, mindless, highly efficient manner. But firing lines are not realistic. They are not an environment for developing a sense of awareness, change, or unpredictability.

COLD RANGE. I actually never understood this practice. We trust police officers to carry loaded weapons on the street...but not on the range. Nothing else to say. Moving on...

RANGE COMMANDS. Commands are for compliance, not thinking. How can you expect someone to exercise judgement when they've always been told what, how, and when to do it?? To pull from a metaphor from Sonja Blignaut:

"It's hard to survive in the jungle if you were trained in a zoo."

SYNCHRONOUS ACTION. This again goes with the industrialized learning environment. I don't want robots; I want thinking, judging, unique individuals...who might do something unpredictable. But I need them to have the safety and effectiveness of their actions in their mind when they are figuring it out on-the-fly. A proper tactical mindset is about harnessing and coordinating the diversity of action.

CHOREOGRAPHED MOVEMENTS. Uniformity, consistency, and standardization of motion is good for marching bands. I suggest we let up on the reigns a bit to allow for some customized, personalized experimentation for what works (or doesn't work) for each individual. Practiced movements become rote regurgitation; it provides no environment for communication, coordination, or adjustment.

To summarize my issues with the classically-trained mindset, it's a complaint of control. Range officers and firearms instructors are generally hyper-focused on control, because they believe that control produces a safer environment. This paradoxically makes the street less safe.

I argue that control on the range takes away from the shooters' decision-making experience. It's in the sense-making, judgement, orientation, intuition, and forecasting aspects that are stripped from a shooter when s/he's under the control of a hierarchal, over-bearing instructor.

Do you have to sacrifice safety when you give up control?

No. You actually gain safety...through the thoughtfulness, judgement, discretion, and risk management displayed by shooters who accept responsibility rather than merely do as they're told.

It's ironic. Control = illusion of safety.

Invest in an environment where control is more evenly distributed and you will reap the dividends. In awareness. In safety. In communication. In decisiveness. In your people.

Lou Hayes, Jr. is a criminal investigations & intelligence unit supervisor in a suburban Chicago police department. With a passion for training, he studies human performance & decision-making, creativity, emotional intelligence, and adaptability. Follow Lou on Twitter at @LouHayesJr or on LinkedIn. He also maintains a LinkedIn page for The Illinois Model.
firearms