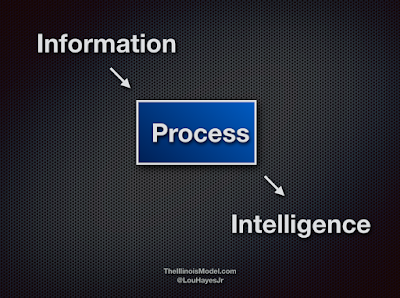 Incoming information may come with varying levels of confidence. At its best, information is absolutely factual, objective, and without dispute. In the middle: moderate belief, lacking data, missing pieces. At its worst: wrong, inaccurate.

To use some terminology from complex adaptive systems, the information (nodes) needs to be clustered together. These are the connections and relationships made between various pieces, clues, and facts. And as the nodes have varying levels of confidence, so do the connections. The connections can be described as (as opposed to categorized): static, timeless, unbreakable, drifting, transient, weak, dynamic, unknown, or other.

Consider a car. Cars play significant roles in crime. Cars have pieces of information that cluster together. For a single car, the manufacturer, model, and body style are quite timeless; these aspects are (relatively) unchanging. The color of the car is not so static, but quite rarely do cars change their paint schemes over the course of its useable life, let alone the course of a crime spree. The same goes for wheels, emblems, and other physical aspects. The Vehicle Identification Number (VIN) is a serial number used to identify cars, especially stolen ones. VIN tags are changed to mask the stolen status of car. Registration or license plates are probably the most commonly (and easily) changed parts of a car.

Connected to the car are people: owners, drivers, and passengers. Who was/is driving? Who uses it? Who was in it? Who shares it? Confidence and consistency spans from the sole owner/driver to the person who took a ride one (1) time.

Also connected to the car are places. Where does the car frequent? Where does it travel? What are the routes or patterns of movement? Who is with/in the car at these different places? Also, how is this information being learned? License plate reader tech? Video surveillance? Eyewitness accounts? Registration and titling documents? What are the levels of accuracy of each of these methods?

And this is an application for just cars. Imagine all the other networks that we can look at: organized crime; street gangs; terrorism; traveller crews moving across the country; white-collar financial crimes; identity theft. The list goes on and on...

I see a direct usefulness of the Cynefin sense-making framework as I look at criminal intelligence. (Sorry, but besides this eight (8)-minute video, you're going to have to study Cynefin on your own.) 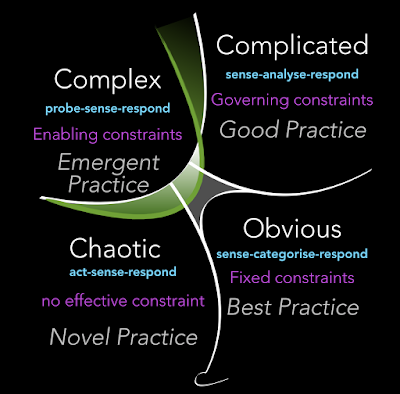 Take a look at the suggested/appropriate constraints within each domain:
Constraints match up well with confidence, at both the node and the connection level. They also match up well with the concept of theories, along a spectrum of sorts (though Cynefin creator Dave Snowden openly disputes the application of spectrums here).
Criminal intelligence is much more than crime statistics. It's more than dropping pins on maps, plugging information into algorithms, or showing objective associations between crimes, people, and places. Criminal intelligence is an art form that is perpetually refining, highly networked, double-looped / feedback-driven, and experimental in nature. It is the job of analysts to not only collect, crunch, and re-format facts, but to develop theories. Theories that will inevitably be biased, wrong, and outdated in some form or another...but nonetheless vital to the mission of crimefighting.

These theories must then be communicated, accessed, or distributed to those who make decisions...in formats that allow for enhanced sense-making, understanding, and with the allowances/tolerances that they may be inaccurate, incomplete, and slanted. Theories (and not data alone) are what best inform organizational (and community) awareness, strategic deployments, tactical interventions/investigations, and more.

I believe that Cynefin gives us a conceptual framework and language to better develop this intelligence in policing. It can assist in creating better visualizations, designing bulletins, and communicating difficult concepts, predictions, and relationships.

Over the next few weeks, I'll be attending a variety of workshops centered on criminal intelligence. I hope these above thoughts become more refined and more easily communicated. Stay tuned.

In the meantime, where am I wrong? Where am I on the right track?

Lou Hayes, Jr. is a criminal investigations & intelligence unit supervisor in a suburban Chicago police department. With a passion for training, he studies human performance & decision-making, creativity, emotional intelligence, and adaptability. Follow Lou on Twitter at @LouHayesJr or on LinkedIn. He also maintains a LinkedIn page for The Illinois Model.
cynefin