Fallacy and Complexity of Police Accountability 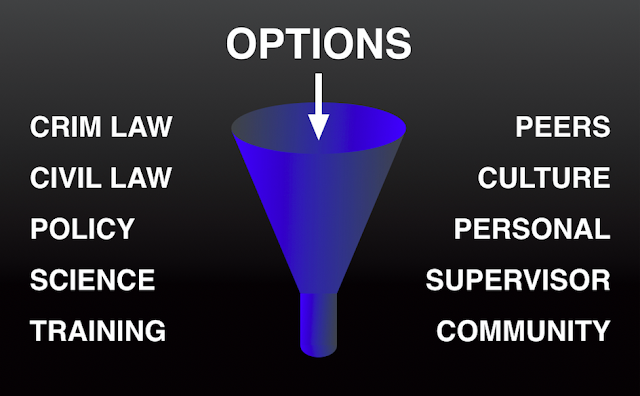 I tend to roll my eyes when I hear screams for police accountability. Not because I don't believe in holding our cops to standards. But because those screaming loudest rarely reference or discuss which standards aren't being maintained. And if so, they use a different vocabulary from that used within that particular body, group, realm, arena, or community.

Police powers and force are complex topics -- because of how many perspectives, values, beliefs, experiences, and ideas are out there. Some philosophies are simply a tad disjointed or misaligned. Others are in direct conflict with each other!

So which standards, bodies, or realms am I talking about?

I've grouped, separated, and outlined ten (10) of them here:


My purpose of this post is to help guide and enhance the discussion of police accountability.

The discussion must first include which standards of behavior are being referenced.  Only then can we argue about the placement, height, leniency, impossibility, reasonableness, or preferences of where those standards sit.

Basically, which high jump bar are we talking about...before discussing if it's set at the right height.

I tend to believe that accountability is a fallacy, in that it lacks any sense of singularity of standards, expectations, or values. The diversity of standards is what makes policing such a complex environment.


That is still a complex endeavor, with plenty of potential conflict among the interests, values, and priorities during complex situations in dark alleys.

When these standards are harmonized in alignment, decisions tend to come easy. As do judgements and evaluations of the police officers.

But when the standards and expectations are not aligned, we will continue to rely on 5-4 court decisions, imperfect internal affairs investigations, premature protests in the street, lackluster training,  politically-driven policy manuals, and officer wellness issues.

Can any of this above help steer the debates into meaningful dialogue?

Or are we beyond that?