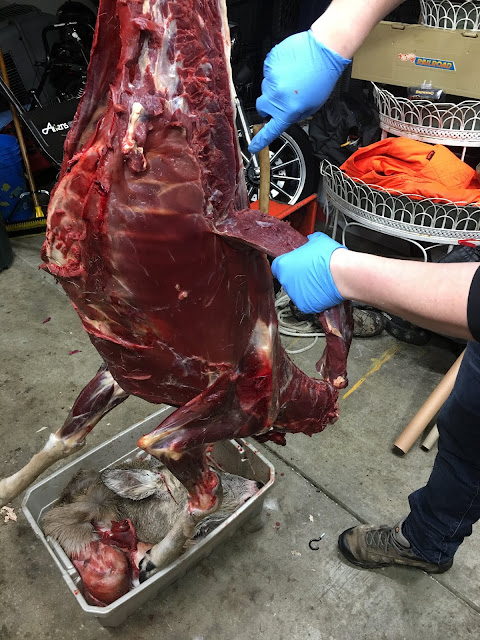 I assume the above photo of a deer being butchered by its killer (hunter) offends some of you. To others, it's just something we'd rather not see. That's exactly why I chose it.  Not everyone wants to know how the sausage gets made...or from where the steak originated.

Taking it one (1) step higher -- not everyone wants to eat the sausage or the steak.

A huge frustration for me is socializing with other people who are picky eaters. My wife and I will eat about anything under the sun (we draw the line at animal brains and digestive systems, however!).   Picky eaters lack a curiosity or sense of adventure that excites my wife and me. Let's face it: They're boring and a pain in the ass...at the same time.

The thing about picky eaters is that no one will ever call themselves "a picky eater." They refute the seemingly negative connotation by rationalizing:


"I'm not a picky eater. I just don't like a lot of different types of food."

{Eyeroll} I got news for you: That's exactly what makes you a picky eater. It's the precise definition!

Everybody wants to fool themselves into believing they're adaptable, flexible, and open to new options. But that's not the reality. Some people are extremely fickle, selective, and intolerable when it comes to even small deviations from their sense of normal.

Adaptability boils down to not only what you enjoy...but what you can tolerate or endure. It's about the variety of conditions or environment in which you can thrive or survive.

I often write and speak about standardization and how it's boring and uninspiring... sorta like a McDonald's hamburger. But hidden inside can be some traits of adaptability.

Eighteenth (18th) and early nineteenth (19th) century firearms were custom made. Each weapon was crafted, with individual parts and pieces fit to that particular weapon. Your trigger assembly would likely not be interchangeable with that of the soldier standing next to you.  Your gun parts would be unique to your gun.

Recognizing the challenges with this precise fitting, gun manufacturers began designing weapons where parts could be interchangeable, compatible, replaced, and fixed...much like a set of modern LEGO bricks. Today's military weapons have parts that can we swapped out with relative ease and reliability. Gunsmithing is a artisan trade being displaced by robotic machinery - programmed with engineering tolerances governed by military specifications and standards (aka: Mil-Spec).

As a police department weapons armorer, this concept of Mil-Spec is of great value to me. I could feasibly dump the parts of a dozen weapons into a box, shake it up, and rebuild a dozen weapons. The tolerances of each part are such that they allow to be mixed-and-matched (into a finite number of combinations, based on the number of parts-per-weapon, but I'll spare you the maths!).

I've known plenty of folks who are missing hands, feet, legs, arms. The same goes for those with significant cognitive irregularities. They all can be considered, in some respect, as being disabled. Think about what the term disabled or irregularity or not normal means...and the imagery it brings. In one regard it may mean that the person's traits do not fall with certain expectations, as if in the tails of a normal distribution curve.  They may fall outside a certain tolerance for what is deemed regular, common, or normal.

If you're confined to a wheelchair or oxygen tank, you're going to have trouble hiking down into the Grand Canyon. Those with Down Syndrome may never drive a car. A double hand amputee will never play the piano as we've been conditioned to imagine it being played.

But leg amputees finish triathlons. People with Autism have hidden talents -- memory, math skills, and detail-mindedness. In many ways, disability is context specific. They have trouble doing this, but excel at doing that.

As a healthy, able-bodied 6'02" white man, few (if any!) would consider me disabled. (That's 1.88m for you lucky enough to live where the metric system governs!) Yet I have a hard time fitting into small cars, my kids' blanket forts, and the free t-shirts handed out at community charity events. Simply, I don't do well in certain circumstances. (I did however once own a Mazda Miata that required a rather unique way to squeeze into the driver's seat!)

How does disability factor into one's ability to tolerate? ...and therefore adaptability?

How about an Irishman's inability to tolerate the sun without a serious case of sunburn? Could it be a defined as solar disability?


Adaptability boils down to not only what you enjoy...but what you can tolerate or endure. It's about the variety of conditions or environment in which you can thrive or survive.

So how adaptable are you?

Are you willing to admit you're a picky eater?

In what contexts do you find yourself being a flexible, rule-breaking, creative thinker who can seize opportunities and solve problems in the moment?

In what circumstances are you a little whiny bitch?

In each life situation, how do you find yourself under the middle of the bell curve...or its tails?

Where do your skills and abilities match up with a particular environmental need? Where are they lacking or at odds?

What demands or circumstances do you avoid because of a lack of ability or tolerance to them?

What's in your control or influence to change and grow...and what cannot be changed?

How do these answers impact where we go, what we do, and how successful we are likely to be in any given endeavor?

How happy or content we will be when things change...or do not change!?! 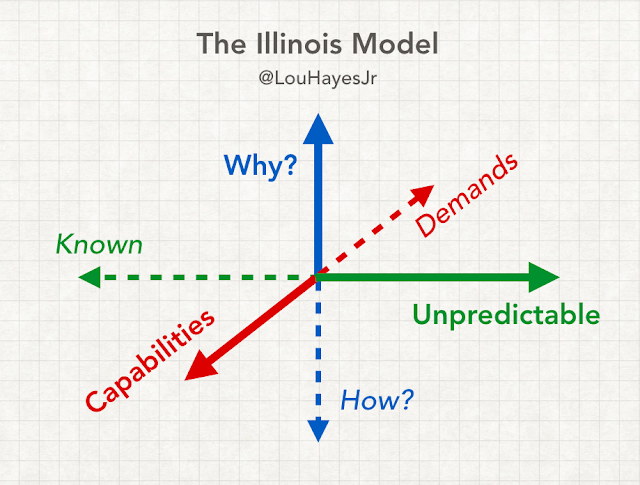 The red "Stress" axis of The Illinois Model addresses and accounts for these capabilities and demands on your and systems and tools. How able are you to endure the changing and unpredictable demands? A reader recently sent me a message suggesting that this red dimension be renamed "Fitness" instead of "Stress." I like that. How fit are you?

Adaptability requires we look places we don't want to look and discuss things we don't want to discuss -- like at bloody deer tenderloins and about mentally handicapped people. These things cause many of us, myself included, some level of discomfort.

That which tolerates more is more compatible with the adverse, the unknown, and the unknowable. Its chances are simply and harshly a bit better at surviving and thriving, regardless of how uncomfortable I am in saying that.

Real life cares little for my abilities, my comfort, my preferences, or my tolerances. Real life just is.