April 10, 2018
Last month, I was the guest moderator for the #EduGladiators tweet chat. I discussed the topic Nurturing Adaptability in their Leadership Series. The EduGladiators community is one of school teachers, principals, and other education sector professionals. I was certainly an outsider, but they warmly welcomed me with open arms.

The following is a blog post that I wrote to set the stage for the tweet chat: 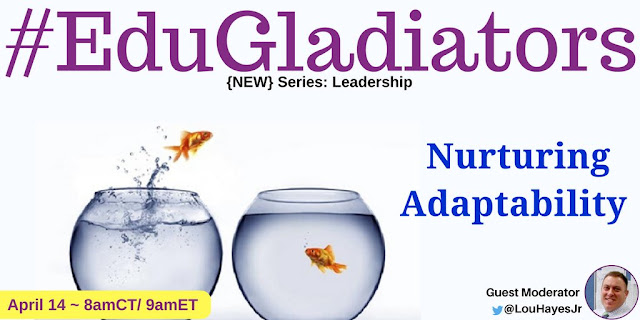 My journey of learning about education, training, and human development has been one of casual, self-navigated exploration. I have zero formal education on the topic. So how did it start?

When I was 21 years old, I dropped out of college to accept an earlier-than-expected offer to become a police officer. Within a handful of years, I found myself in the training unit as a firearms instructor - chosen because I was good shooter, not because of any educational or learning background. This is still a fairly typical practice in policing - take those who know the content & assume they can teach it to others.  I found most all of the coursework to become a trainer in policing to essentially be “speech class” and woefully missing vital concepts of instructional design, curriculum development, integration of content, delivery methods, and testing/evaluating.

As such, I’ve been forced to seek out ideas, theories, and research on my own...and experiment with them like a tinkerer at a workbench. I read blogs and research summaries... and watched college lectures and TED Talks online. But it wasn’t until I started learning about complexity, complex adaptive systems, and adaptability that all the pieces began falling in place.

Much of police training had been industrialized, technical, and mechanical in format. It was highly structured, standardized, and repeatable. There were objective, observable expectations in how teams moved in formations. Shooting scores were tabulated against arbitrarily-chosen time and accuracy standards. Laws, statutes, and policies needed to be memorized. Every attempt was made to develop an if-then checklist response.

Police training was also extremely fragmented into subject matter. The attorneys teaching Constitutional law were not the ones moderating use of force scenarios. The firearms instructors were not the ones teaching report writing or traffic stop tactics. The defensive tactics (physical fighting) trainers weren’t delivering a consistent message with the mental health clinicians or the attorneys.

Training was very much rooted in demonstration, compliance, regurgitation, rehearsal, choreography, and reproduction. Very little actual sense-making or decision-making was demanded of the student officer. As long as student officers did what the instructor wanted, the student was deemed certified or qualified.

But despite the high volume of training, we continued to see failure after failure in the field. Not often failures in technical, physical performance...but rather in situational awareness, in making sense of confusion, and in decision-making where a black-or-white answer did not exist. When real life added or shifted a variable, it was as if the officers were ill-equipped to handle the fresh twist in the situation.