The Traits of a Universal Policing System - Applicable, Scalable, Adaptable.

June 11, 2013
What is a universal policing system? Well, nothing really exists of that nature outside our imagination. We have a vision of a Law Enforcement Operations System (shortened to LEOpSys, lee-OP-sis).  It takes into account the Before, During, and After aspects of any police incident: 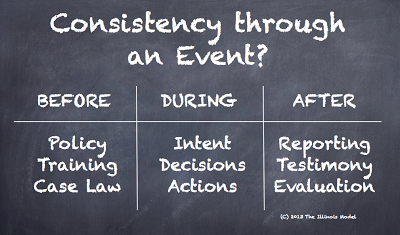 But there are several more aspects to this consistency of policing operations. This model must have wide application, scalability for size and scope, and fluidly adaptable.

But then we must explain what it means to "be applied" to those problems. The Illinois Model™ is a systematic approach - meaning there is a flow to problem-solving, decision-making, and implementation. The one applying the process begins at the top and moves down. Answers to the questions posed in the below scatterchart are general enough to be used for any situation:
The model is broad and inclusive enough to be applied to each and every one of those above listed police problems. The model is also designed in a manner so it can be implemented in department policy, hasty pre-planning, internal investigations, debriefing, and as a content or layout template for report writing. We believe when the same process is used for policy, planning, decision-making, and documentation, we better analyze problems, make higher quality decisions, and more accurately write about our actions. We increase of effectiveness, increase our safety, increase the citizens' safety, and reduce liability. In short, we do the right things.

The system must be able to be used by any number of responding officers, any amount of resources, and to any level of seriousness or complexity of the situation.

Our model needs to be simple enough to be used by a solo officer. That officer may be making a car stop for a simple traffic violation (speeding, registration, disobeying a sign) or investigating a late night prowler call in a neighborhood. By the nature of being the only officer on the scene, s/he becomes the de facto Incident Commander (IC). While we rarely consider having an IC for a situation requiring only a traffic citation, that officer is making many instantaneous decisions based on: ethics, law, strategy, and tactics.

Our model must be able to expand to include events ranging from: two officers (partners), up to teams of four or five, up to 10-man warrant teams, up to full SWAT callouts, up to mutual aid incidents of hundreds of officers.  The process must account for the same issues that one single officer does: ethics, law, strategy, and tactics. Imagine this complex event:


Two active shooters enter an office building. They injure a dozen citizens. One shooter flees on foot into an adjacent forest preserve. The other shooter holes up with hostages in a office room.

There are many issues to answer. (The red bullet points 1-4 are prioritized in order, according to The Illinois Model. The lists are not prioritized, nor exhaustive):
For a large scale incident as explained above, there are competing threats, missions, and strategies. There are teams of officers using Stabilizing strategies, while others use dynamic Action strategies, while others are in-between those two speeds -- simultaneously. Groups of officers may be assigned to different problems...that come with their own threats, goals, and plans! But as a whole, our "system" accounts for leading and managing all these different problems.

Charles Darwin said, "It is not the strongest of the species that survives, nor the most intelligent, but the one most responsive to change." The same goes for police officers and tactical operators.

Adaptability is the power to make adjustments to a changing or changed situation. In policing those changes take on many forms: a compliant arrestee who suddenly attacks; an active shooter who is shot dead, but injured persons remain; a armed suicidal man now threatens officers; a fleeing offender runs into a shed; the hostage taker begins shooting hostages; the approaching warrant entry team takes fire from within. Each of these changes requires a complete re-analysis of the situation. There may be "command" changes or adjustments in: threats, goals, or plans. Each time there is a change, the applier of the system must begin the process back at the top of The Illinois Model tiers. It is a reorientation of sorts -- or cycling back through the Observe-Orient-Decide-Act or OODA Loop. Successful officers and tacticians adapt quickly and correctly.

There exists a legal corner here. Situations change in regards to Reasonable Articulable Suspicion and Probable Cause. Officers either gain or lose "evidence" of crimes or other justifications to search or seize. Officers must adapt to these changes - to either effectively fight crime or stay within lawful bounds of authority.

But there is still another aspect of adaptability - at the team tactics level. Team tactics must have a high degree of adaptability, according to:
These are serious issues that frequently cause the demise of tactical operations. By using a "concept-based" approach to team tactics, many of these issues can be crossed off the list of concern. When officers understand underlying universal team principles (rather than rigid formations or movements), they can quickly and effectively adapt to these changes in situation, speed, and terrain. By using general versus specific tactics, officers make needed adjustments on-the-fly to stay safe yet speed and goal-oriented.

The traits of Applicable, Scalable, and Adaptable are essential for a system to be so boldly called universal or singular. A system must be able to be used in a wide variety of operational problems (including policy, training, testimony), be able to expand or contract based on resources or manpower, and have a high degree of change-ability or responsiveness in dynamic environments.

We believe in The Illinois Model for so many situations and purposes. We hope you consider adopting it as your Law Enforcement Operations System. It's free and it works.

Louis Hayes is a co-developer of The Illinois Model™ law enforcement operations system (LEOpSys) and moderates several courses rooted in its theory and concepts. He is a 15-year police officer, currently assigned to a multi-agency tactical unit in Chicagoland. Lou will be presenting the above LEOpSys vision at the Summer 2014 CALEA Conference in Schaumburg, Illinois. A full compilation of articles on the model can be found here.
generalism tactical