The Opposite of Strategy 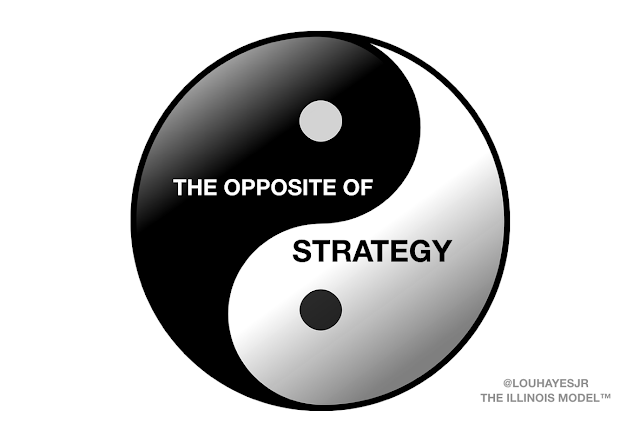 I'm fascinated by the intentional practice of examining the opposites of things. It's as if I can get a better understanding of a theory, concept, idea, or principle when I seek something else that is in direct competition with or in tension with the original term I was thinking about.
You get the picture. There are plenty of these sorts of dichotomous concepts - especially to those of us who study complexity and adaptability.

So with that, the concept of strategy has been on my mind recently. Without turning this into a post about strategy itself, I'll go easy on my definition or explanation of it.

To me, strategy is a vital link between goals and tactics. Strategy is more conceptual (and more steadfast) than tactics.

I also believe that strategy is fractal or recursive - like a set of Russian nesting dolls. My strategy is my boss' tactics, etc, etc.

Along the same lines, in policing, my Department can have an organizational strategy. But I also need a specific incident strategy each time I respond to a 9-1-1 call or a case strategy when I take on a criminal investigation. Strategy takes on many different scopes. Or like I said...fractal.

So, in an attempt to gain a fuller insight about strategy, I posed a question on both LinkedIn and Twitter yesterday:


What's the opposite of strategy? [Yes, I think this is a trick, unanswerable question. But the joke might be on me, so keeping my mind open...]

The responses started pouring in. I recommend clicking the links above to each social platform to see them all...and to engage with the authors.

There were some replies that I simply brushed off. They did not resonate with me or my current line of thinking about strategy.

But there were other replies that bounced around in my head for a bit:
Intuition, impulse, and inertia were at the top my list of contenders for opposite of strategy. They bounced around the longest. But nobody pat themselves on the back just yet...

The winner of the "I-Had-To-Read-This-Shit-Five-Times-To-Understand-It" Award goes to...friend Joe Willis:

I'll play the Herzberg Card and say, "No Strategy" and like satisfaction, those who have never had it can't see what they're missing and will easily mistake anything closely resembling it as, well in this case a real "Strategy..."  Often what happens in the absence of strategy is well intended, "mission commandesqe" adaptations to effectively, efficiently, and ethically operate in a chaotic system.  But staying true to the Herzberg parallel, the absence of chaos (often as a result of good mission commanders doing damn good work) doesn't imply an actual "Right" strategy exists - it simply means there is no chaos. This essentially gives a false sense of security that what has been mistaken for strategy is actually a right strategy.

I appreciate Joe dearly. He's a thinking man with an ability to pull things apart and build them up. Though I've never spoken to him specifically about it, I'd bet he most definitely gets the opposite game I play.

Lastly, the response that rings most harmoniously with me comes from Charles Bailey:


There is no opposite. We all have it and we all use it regardless of what we call it. It can be good, bad, or blissfully ignored but it cannot have an opposite. Some things don't.

For me, that seals this version of the opposite game. Until someone can change my mind, I have my answer: There is no opposite of strategy. I feel more confident about it now than when I first posted the question.