One needn't look far to find an online video of some copper somewhere losing his temper.

Relax, gender police. I use the masculine pronoun here because of two reasons: #1. Statistically, there's more men in policing. But more importantly...#2. Women police officers are almost never the star attractions in these cops-flipping-out videos. So back at it...

I'm about to enter my third decade of policing. In nearly twenty years on the force, I've let my emotions get the best of me more than a handful of times. I'm not talking about the tears of sadness after leaving the scene of a brutal crime, a deadly accident, a suicide, a failed family, or an abused kid.

I'm referring to the instances where I unnecessarily responded to someone by taking the low road of sarcasm, intimidation, disrespect, insult, name calling, or attitude. Of those times I can recall, I look back on them with embarrassment. Simply, those were times that I lost.

I got introduced to the concepts of Emotional Intelligence (EQ or EI) late in my police career. 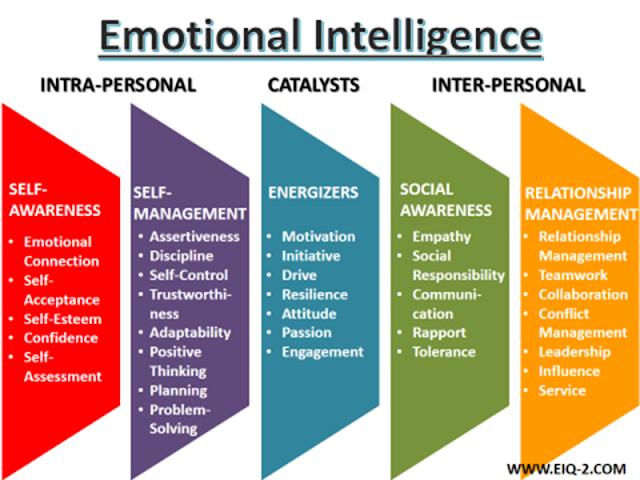 The more I study EQ, the more aspects of policing I see that can benefit from it. My own experiences in American law enforcement have included positions as: uniformed street cop, tactical officer, crisis interventionist, detective, trainer, project manager, and team supervisor. Each of these roles can be enhanced by a deeper understanding of EQ.

Curiously missing from many of these roles and positions are sustained discussions of "the psychological game" - the components of human engagement and conflict. Without delving too deeply into the particulars of EQ(the infographic above gives plenty of foundation), I offer these questions:

STREET/TACTICAL POLICING. How do we:
INVESTIGATIONS. How do we:
SUPERVISION. How do we:
TRAINING. How do we:
I've written entire blog posts on single bullet points listed above. They each include varying levels of complexity, uncertainty, and conflicted variables. Within the police community, there is a lack of harmony (and often a healthy one at that) on how EQ should or should not factor into each of these roles and situations.

I contend that police culture needs to more fully embrace Emotional Intelligence as a vital and missing piece to human engagement and conflict. EQ has been one of my focal points in police training - both formally in course curriculum and informally among my teams and peers. It's shifting our culture, our values, and our philosophy. Our officers and detectives hit the street with different tools and different mindsets....and I see officers repeatedly and consistently winning the psychological battles. (Secret: And citizens win too!)

If you're one to think that EQ is "soft policing," I'd have agreed with you a dozen years ago. I ignored it for too long in my own journey as a policeman. I failed a lot and relied on emotionally intelligent partners and supervisors to bail me out of conflict and complaint. I learned the hard way. And I'm more than willing to share my experiences (and the map of of landmines I've stepped on along the way) with you. Simply, because if you're discounting EQ in policing, you'll likely to be running into the same frustrations as I did.

And every now and then...I still lose. But a lot less often than I used to.

At least that's what my citizen complaint file says.